WHAT RISING INTEREST RATES MEAN FOR YOU

If you follow the housing or economic markets, or if you are affected personally by the recent interest rate hike, you've heard the Bank of Canada raised its key lending rate by a full 1% or 100 basis points last month. While most experts predicted a 0.75% increase, the 1% jump shocked many.

The bank made the biggest one-time increase to the benchmark rate since 1998 in an attempt to curb rising inflation, making it more expensive for Canadians to borrow money for mortgages, lines of credit, etc. To put it simply, rates tend to increase in an overheated economy to slow things down (where we are now), and the rates usually decrease when the economy needs stimulation.

Despite this rate increase being higher than expected, economists expect rates to keep rising. With inflation now over 7%, many Canadians are getting worried high inflation is here to stay, but Bank of Canada governor Tiff Macklem says, "We cannot let that happen."

"We are increasing our policy interest rate quickly to prevent high inflation from becoming entrenched. If it does, it will be more painful for the economy — and for Canadians — to get inflation back down," he said. He also noted that the bank doesn't expect the official inflation rate to come down to 3% until next year and won't reach its 2% target until 2024.
Canada: Inflation Rate

Higher interest rates typically have an immediate cooling effect on the housing market due to a higher cost of borrowing. The housing market was on fire throughout the pandemic, as many existing homeowners looked to make a lifestyle change or upgrade their homes. Many first-time buyers decided to enter the market, lured by ultra-low interest rates. Ultra-low rates ultimately drove up demand and pushed prices to record highs, including here in Calgary.

After low interest rates did their job of stimulating the economy in 2020 and 2021 (some would argue this stimulus lasted too long, which has in part led to runaway inflation), we began to see a shift at the beginning of 2022 with both fixed and variable interest rates trending up significantly from the lows seen in 2020 and 2021.

The effect of rising interest rates on existing homeowners depends on whether that homeowner is on a fixed or a variable rate mortgage.

Fixed Rate Mortgage Holders:
If a homeowner is currently on a fixed rate mortgage, then rising rates won't immediately affect them. But once their mortgage comes due for renewal (typically 3-5 years after it was secured), that homeowner will be subject to the current interest rates at the time of renewal. Whether or not their monthly payment changes a lot or a little will depend on their current rate and what rates are like when they renew.

Variable Rate Mortgage Holders:
If a homeowner is on a variable rate mortgage, then every time the bank of Canada raises the prime rate, their monthly mortgage payments jump accordingly. Overall, prime has risen by 2.25% so far in 2022 and is expected to continue rising to help curb inflation. A homeowner with a variable rate of prime -1% would have seen their interest rate go from 1.45% to 3.7% in the last few months alone, and their monthly mortgage payments increase by 28% over that same period. For every 1% change to prime, that same mortgage holder will see their monthly payment increase another 10%.

THAT'S A BIG HIT TO THE POCKETBOOK! DOES THIS MEAN THAT MOST HOMEOWNERS WON'T BE ABLE TO AFFORD THEIR NEW MORTGAGE PAYMENTS ON RENEWAL?

Not necessarily. Since 2018, all Canadian borrowers have been required to qualify for their mortgages using the "mortgage stress test" to ensure that they would still be able to afford their monthly payments if interest rates rose. Under this stress test, homebuyers were qualified for their loans at the minimum qualifying rate of 4.79% (up until 2021) or 5.25% (since 2021), or 2% above their quoted rate, whichever was higher. Homebuyers had to qualify under this higher interest rate, regardless of their actual quoted rate. So, until mortgage rates start to go above 5.25%, in theory, most homeowners, although unhappy with a higher payment on renewal, should still be able to afford them.

A Lower Budget
Most directly, rising interest rates mean that today's prospective homebuyers qualify for less than they would have a few months ago, which means that their budget for a new home has also shrunk. With the most recent increase to prime in July 2022, the stress test now sits at about 7% for fixed rate loans and 6% for variable rate loans. If a buyer doesn't pass the stress test, lenders must lower the amount they can borrow until they do. In simple terms, a homebuyer quoted a fixed rate of 2.44% in January 2022 would have had to qualify for payments assuming a rate of 5.25%, while that same homebuyer who is shopping today with a quoted fixed rate of 4.34% must now qualify at 6.34%.

Below is a graph showing the effect of just a 1% rate hike over 5 years. 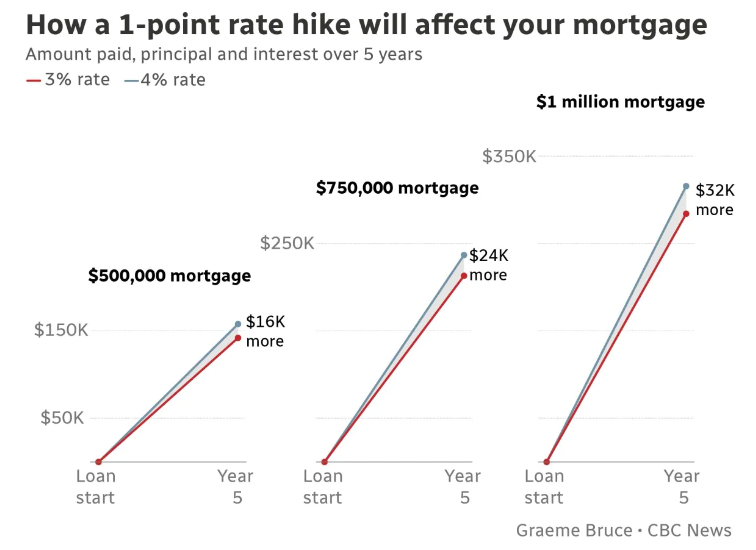 Both the pace at which interest rates have risen this year and the heights at which they now sit have been a shock to many. It has been well over 10 years (not since 2009) since interest rates were as high as they are today, and most economists expect them to continue to trend up this year. Below is a graph of fixed vs variable rates over the last 25 years.

Although rates are considerably higher than they have been since 2009, interest rates are still lower than in 2007 and 2008 before the economic crisis. The reality is the ultra-low rates of 1-1.5% seen in 2020 and 2021 were unprecedented and can't be expected as the norm moving forward.

Homebuyers will need to make some mental adjustments to the reality of today's interest rates and ensure that they can afford their mortgages over the long run, regardless of whether rates go up or down from here.


Confused about the difference between fixed and variable rates? Trying to decide which is best? For more information on both, visit our blog, The Debate on Fixed vs Variable Rates.