Market starts to shift as sales slow - Sales activity in June eased relative to the past several months and with 2,842 sales, levels declined by two per cent over last year’s record high. While sales activity has remained relatively strong for June levels, the decline was driven by a pullback in detached and semi-detached home sales.

“As expected, higher interest rates are starting to have an impact on home sales. This is helping shift the market toward more balanced conditions and taking some of the pressure off prices,” said CREB® Chief Economist Ann-Marie Lurie.

“While we are starting to see some transition, it is important to note that in Calgary year-to-date sales are still at record levels and prices are still far above expectations for the year.”

This pullback in sales was not met with the same level of pullback in new listings. This caused inventories to trend up over previous months. These shifts are supporting some easing from the exceptionally tight conditions as the months of supply remained just shy of two months. While two months is still considered low for our market, it is a significant change over the one month of supply recorded earlier in the year.

After three months of gradual gains in the months of supply, prices eased slightly relative to last month. However, with a city-wide benchmark price of $543,900, levels are still over 13 per cent higher than last year.

With further rate gains expected, we could continue to see slower sales activity and some monthly price growth slippage in the Calgary market in the coming months. However, thanks to renewed migration and job growth in a wide range of sectors, it is unlikely that we will see a full reversal of the price gains made so far this year.

Detached
For the third month in a row, sales levels in the detached market have eased. Much of the pullback has occurred from homes priced under $600,000. While some of this is likely related to the continued lack of supply choice, the pullback in this sector is also related to the rise in lending rates that are impacting qualifications levels and creating some hesitancy among consumers.

The pullback in sales relative to new listings did cause some modest gains in inventory levels compared to earlier in the year. This helped push up the months of supply to just under two months. The shift to more balanced conditions has been limiting the upward pressure on prices. As of June, the benchmark price was $647,500. This is comparable to last month, but still 16 per cent higher than last year. 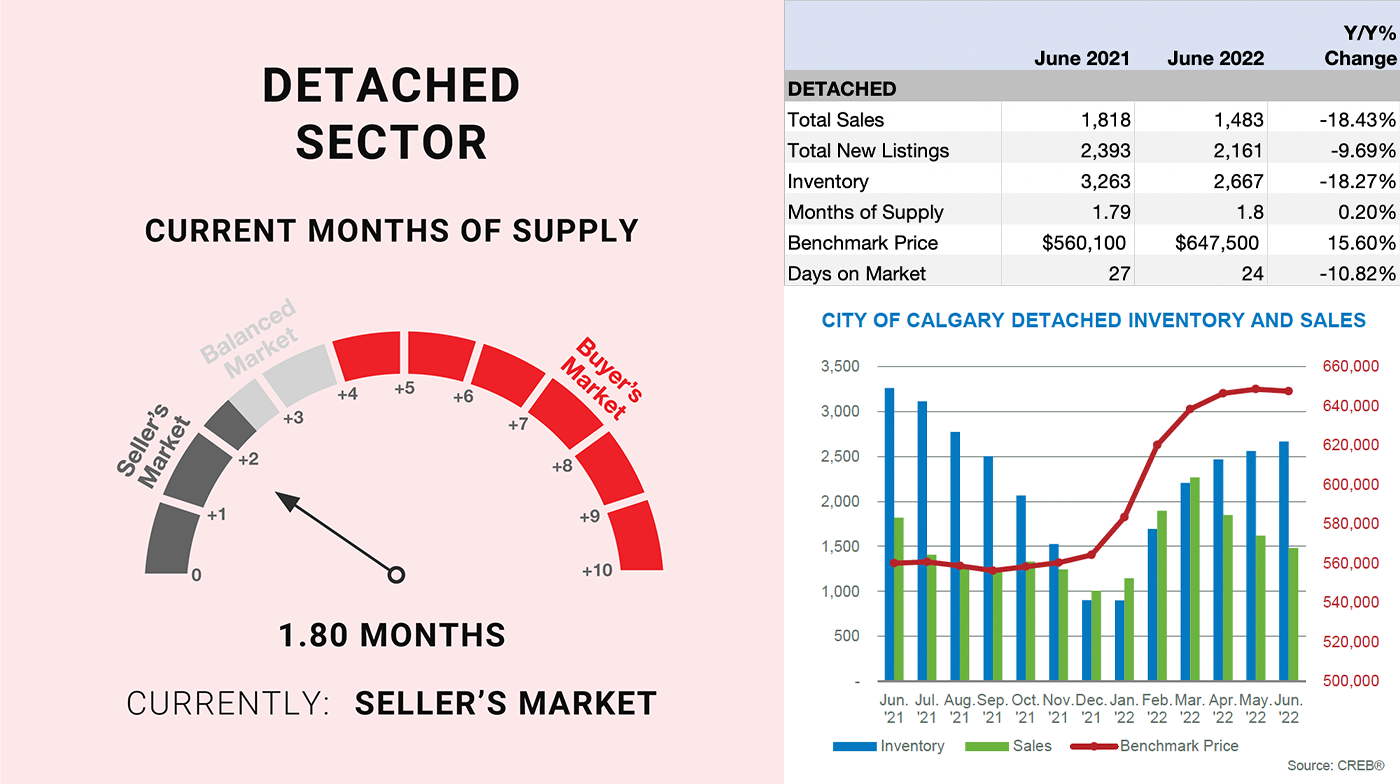 Semi-Detached
Like the detached sector, sales activity slowed in June. While the pullback in sales was not enough to offset earlier gains, it was enough to push the months of supply up to nearly two months. While this gain in months of supply is likely welcome news for some buyers, conditions still remain tight compared to what we traditionally see in this segment of the market.

Prices also saw some adjustment this month easing slightly relative to May’s levels. This was mostly due to adjustments in the North East, East, North West, North and South East districts of the city. However, with a benchmark price of $581,600, prices in Calgary remain nearly 13 per cent higher than levels reported last year. 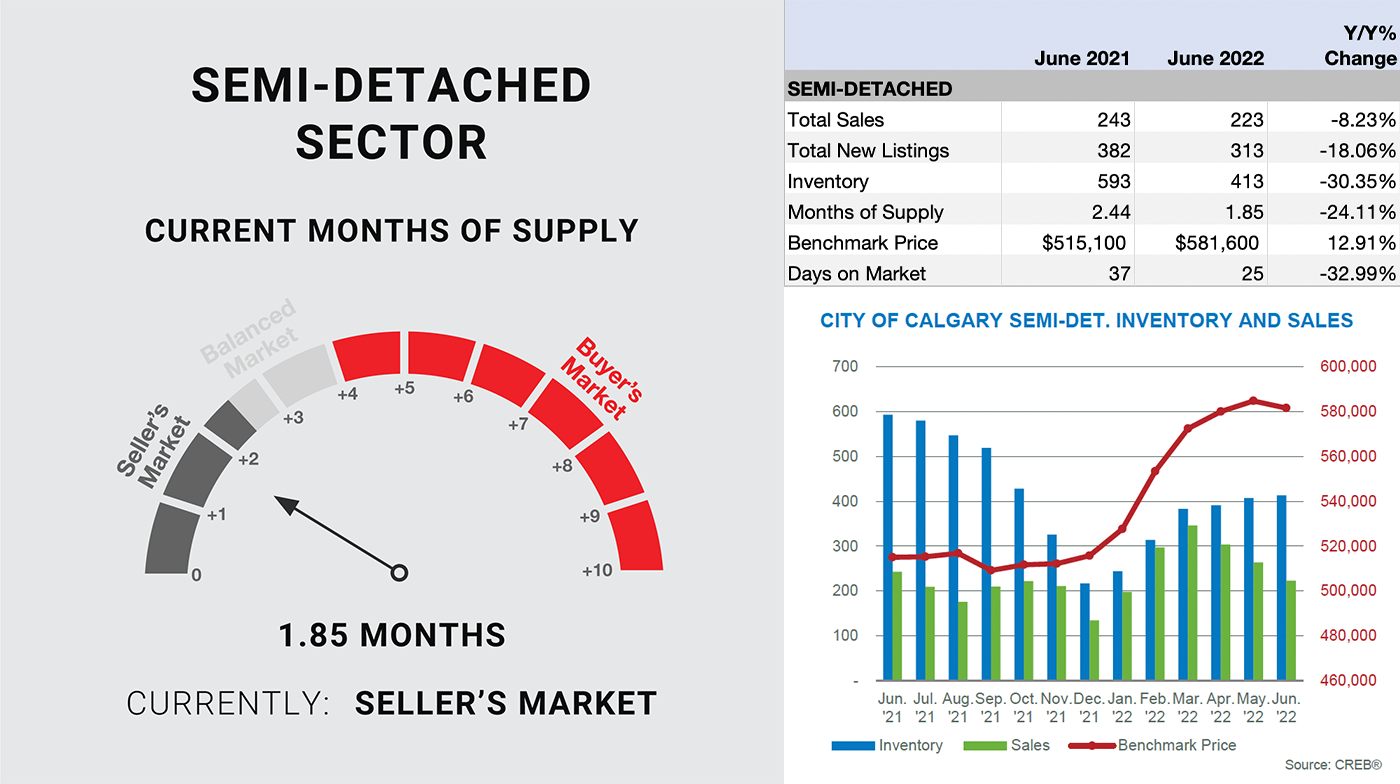 Row
Unlike the detached and semi-detached sector, row sales activity improved and reached a new record high for the month of June. The row market tends to offer a more affordable option for consumers compared to both semi-detached and detached homes. While new listings did improve relative to levels recorded last year, it was not enough to offset the gains in sales. As a result, inventories trended down and the months of supply remained relatively tight at one and a half months.

The benchmark price still recorded some modest gains this month, but the pace of growth slowed down significantly compared to earlier in the year. Overall, the benchmark price reached $363,700, nearly 16 per cent higher than last year. 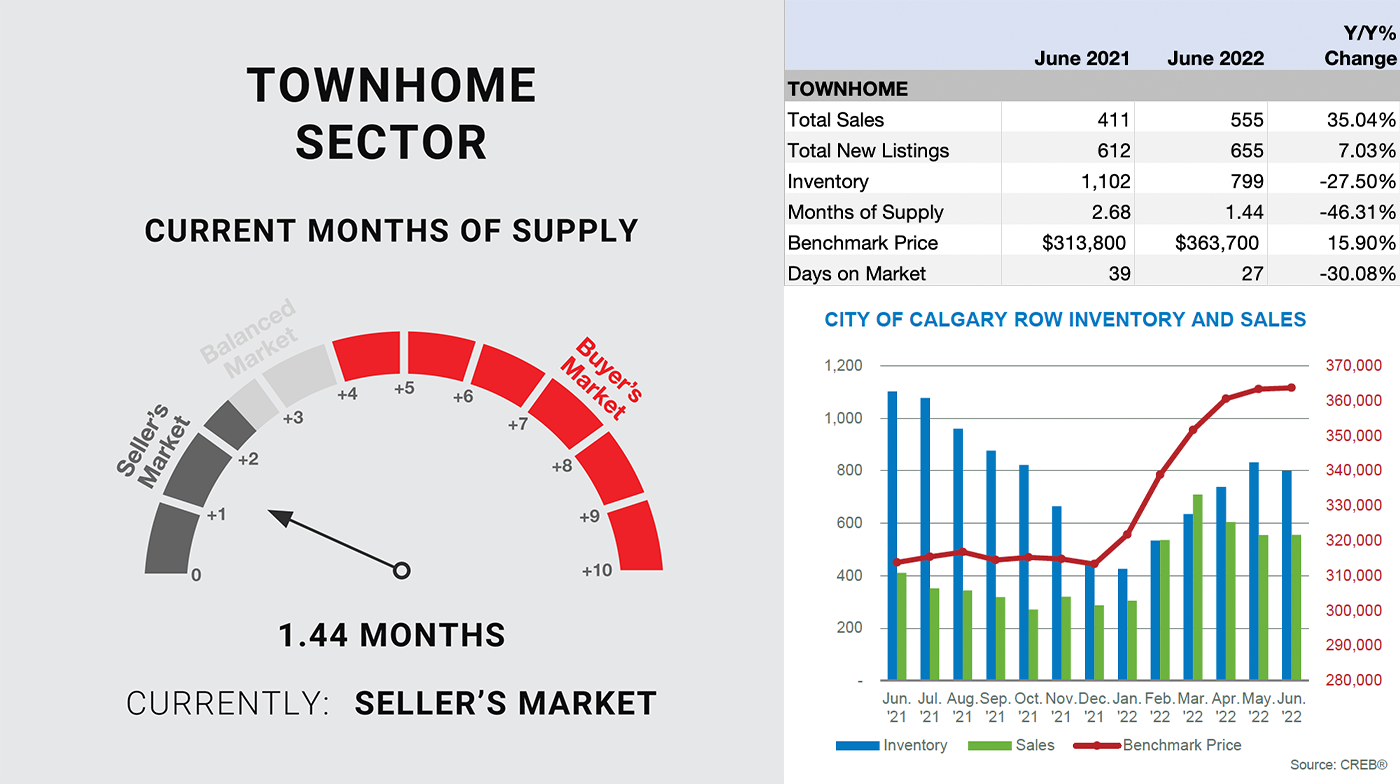 Apartment Condominium
While apartment condominium sales continued to slow from record levels reported earlier in the year, sales were still over 31 per cent higher than levels reported last year. This in part was possible due to the recent boost in new listings. At the same time, the boost in new listings did help take some of the supply pressure off this market as the sales-to-new-listings ratio eased to 62 per cent and the months of supply pushed up to nearly three months. 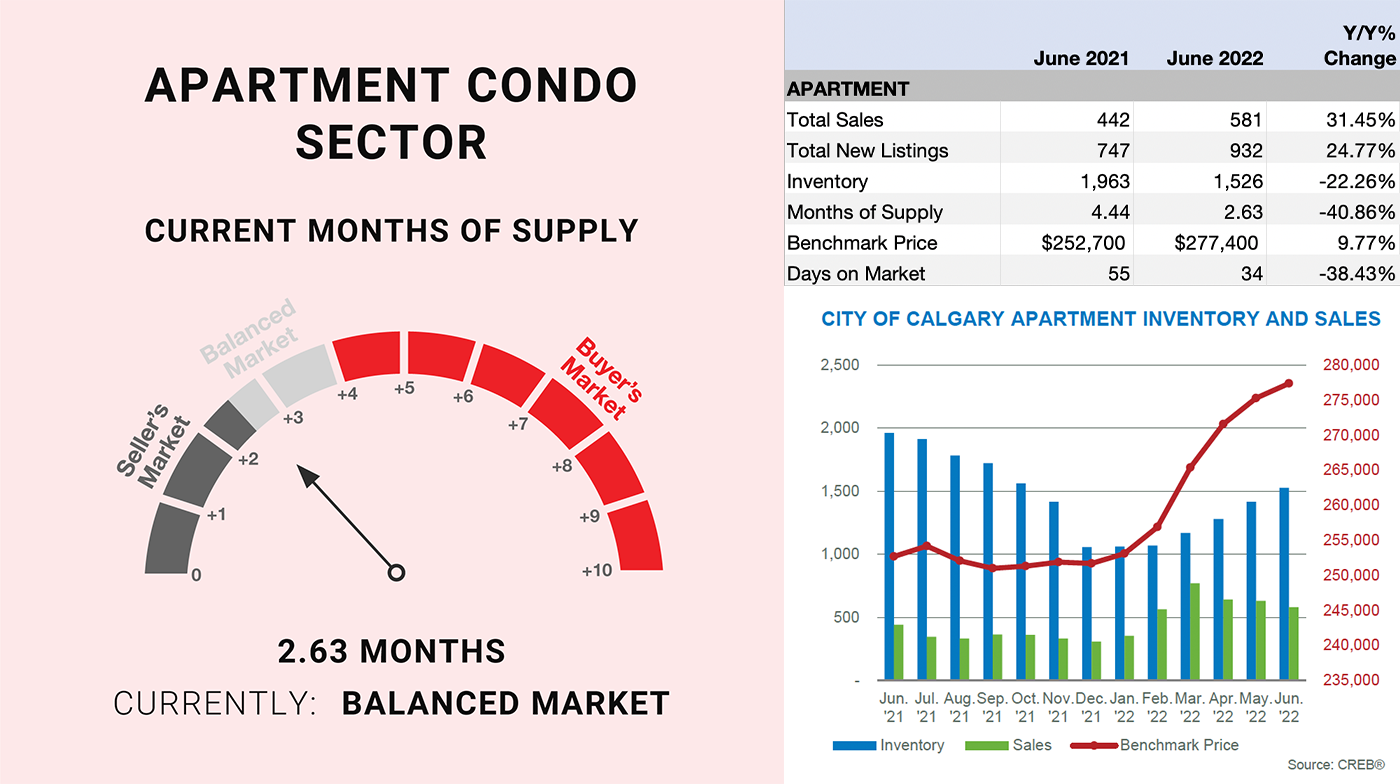