Sellers' market conditions continue to impact prices – Thanks to persistently strong sales, inventory levels in the city eased to 2,620 units, the lowest levels seen since 2006. This caused the months of supply to remain exceptionally low for this time of year at 1.3 months.

The tight market conditions contributed to further upward pressure on prices. The unadjusted benchmark price in January reached $472,300, a monthly gain of nearly two per cent and a year-over-year gain of 12 per cent.

“Expected gains in lending rates are contributing to persistently strong demand in the housing market, as purchasers are eager to get ahead of any increases,” said CREB® Chief Economist Ann-Marie Lurie.

“We did see more listings this month, but it did little to change the market balance or take any pressure off prices. This was expected, as these conditions should persist for several more months.”

There were 2,009 sales in January, well below record levels, but over 98 per cent higher than long-term trends. At the same time, 2,476 new listings came onto the market, resulting in a sales-to-new-listings ratio of 81 per cent. This is far higher than levels traditionally recorded in January.

Detached
New listings improved in January, reaching 1,295 units. However, with 1,148 sales in the month, inventory levels continued to fall. Limited levels of supply are likely preventing stronger sales growth for this property type. Detached inventory levels fell to a new record low at 895 units and for the second month in a row the months of supply remained below one month.

The exceptionally tight conditions caused prices to rise. In January, the unadjusted benchmark price rose by $12,000 compared with December, a monthly gain of over two per cent and a year-over-year gain of 14 per cent. While the gains compared with January 2021 are significant, much of last year’s price growth did not occur until the spring. 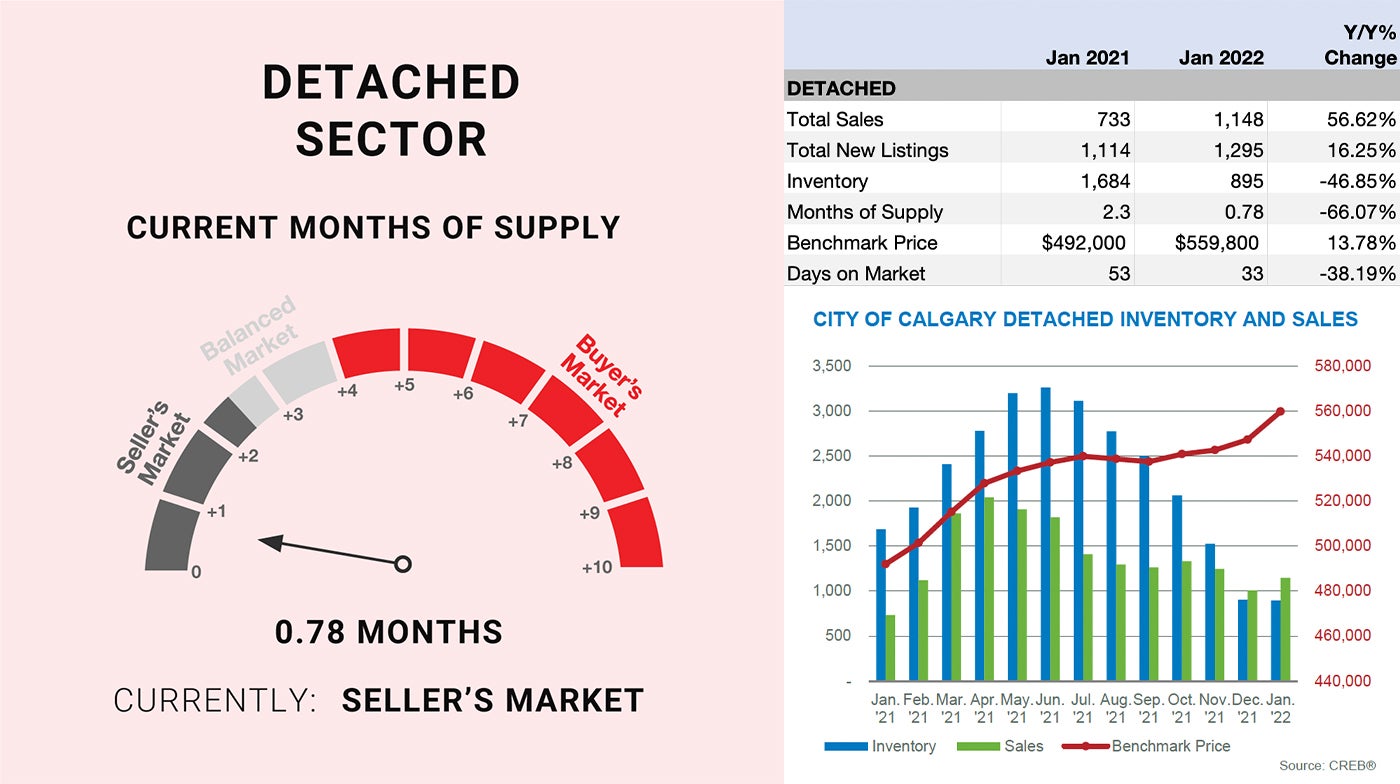 Semi-Detached
January saw a boost in new listings compared to the low levels seen at the end of 2021. This helped support further gains in sales. Despite the increase in new listings, inventory levels remained relatively low. With only 242 units in inventory, levels are 46 per cent lower than longer-term trends. Low inventories and strong sales resulted in a months of supply of just over one month, far lower than both last year and longer-term averages.

The tight market conditions caused prices to trend up compared with last month, resulting in a January benchmark price of $439,900. Prices trended up in every district, but the monthly gains were not as high in the North West and City Centre as they were in the rest of the city. 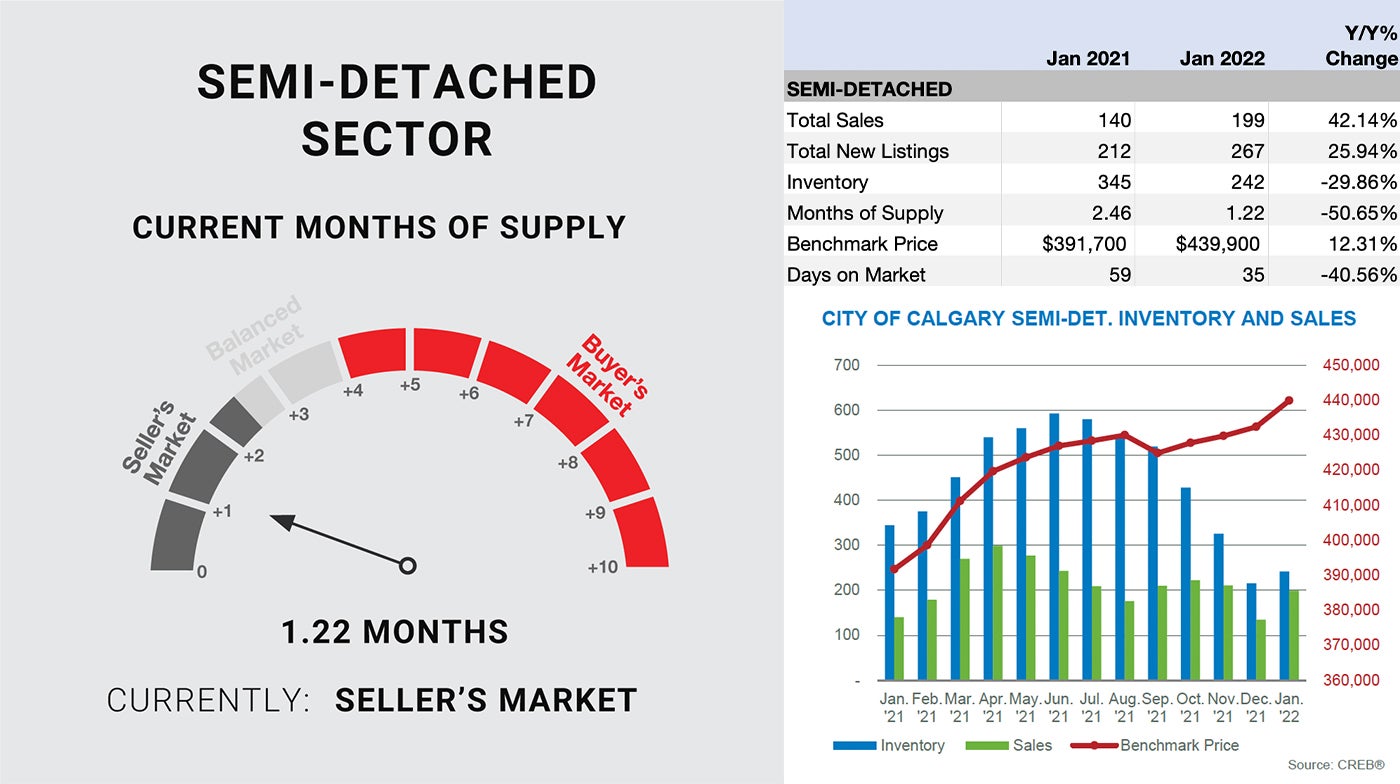 Row
January row sales rose to 305 units, more than double the levels traditionally seen at this time of year. The improvement in sales was related to the level of new listings this month. New listings are still lower than traditional levels, but they did rise from figures seen over the last few months of 2021. Inventories eased slightly compared to last month, but with only 422 units in inventory, supply levels remain well below long term-trends. As a result, the market continues to favour the seller. 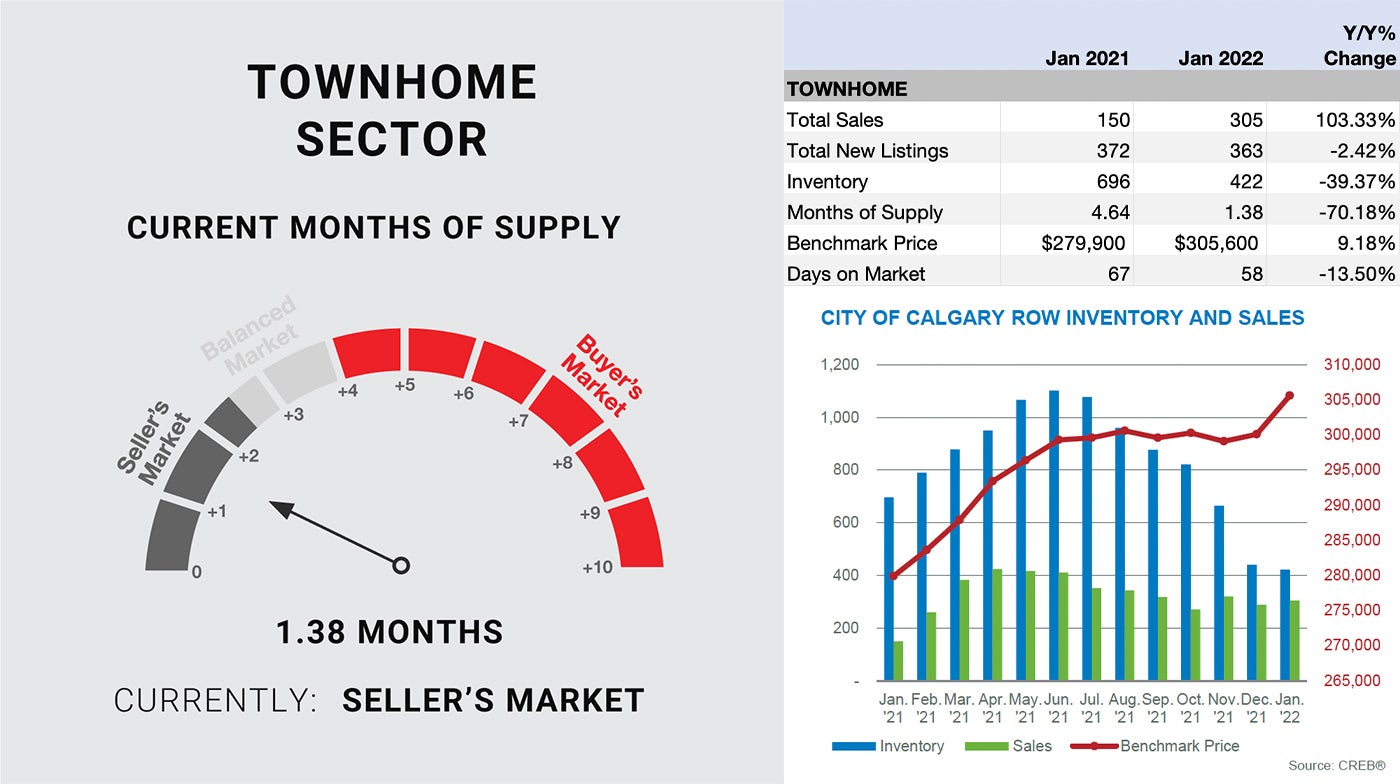 Apartment Condominium
With 357 sales in January, levels were the highest they have been for the month since 2007. The improvement in sales was supported by the number of new listings that came onto the market. In January, there were 551 new listings added to the market. With just over 1,000 units in inventory, there is more supply available in the apartment condominium sector than in any other sector. Despite the improvement in sales, the months of supply has remained at three months, reflecting relatively balanced conditions.

With fewer supply challenges in this market, prices have remained relatively unchanged compared to last month. The unadjusted benchmark price of $251,200 in this sector is over two per cent higher than last year. 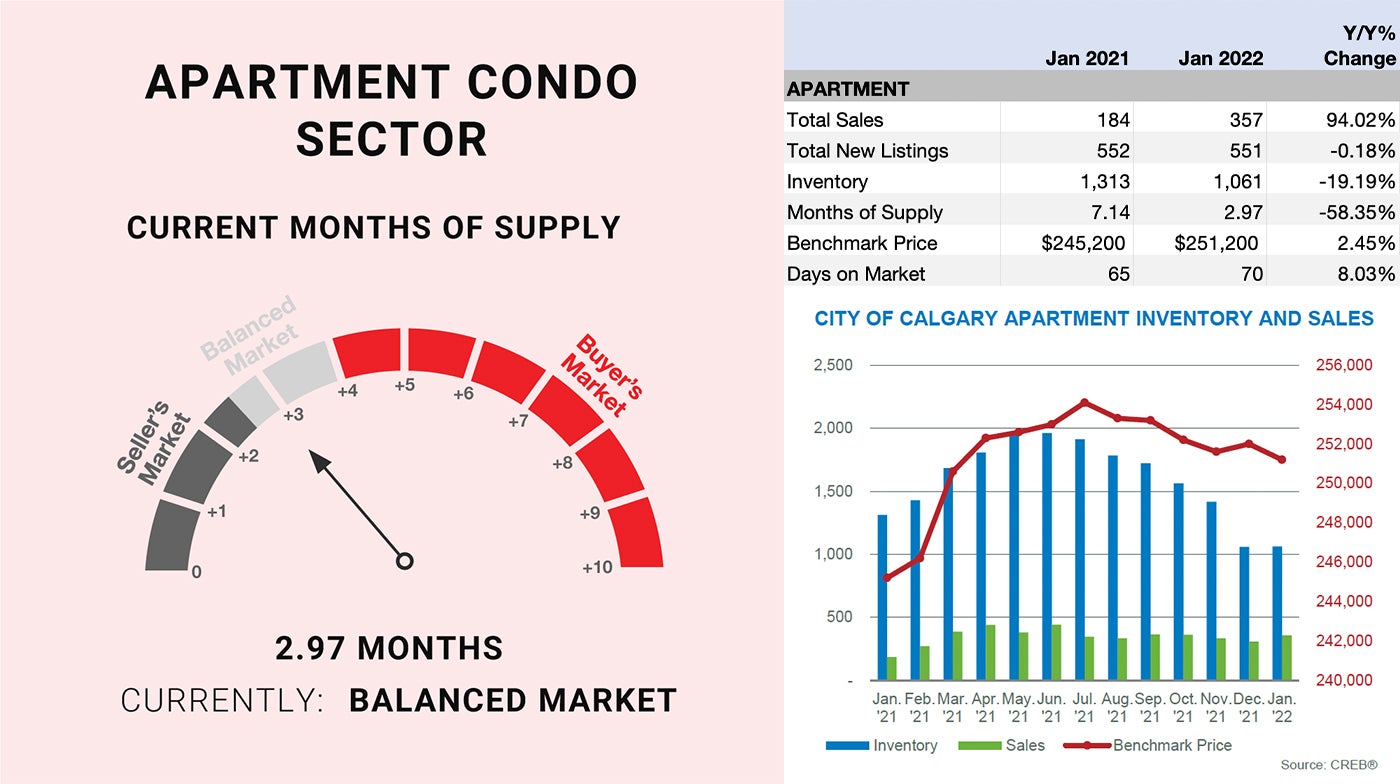