“Moving into the fourth quarter, the pace of housing demand continues to exceed expectations in the city,” said CREB® Chief Economist Ann-Marie Lurie.

“Much of the persistent strength is likely related to improving confidence in future economic prospects, as well as a sense of urgency among consumers to take advantage of the low-lending-rate environment.”

New listings have improved relative to last year, but stronger sales caused further easing in inventory levels, which remain 16 per cent lower than last year and longer-term averages for the month. Supply levels have struggled to keep pace with demand, but much of the decline in the months of supply has been related to the strong sales levels. As of October, the months of supply dipped to just over two months.

Thanks to gains in most districts, detached home sales improved by 17 per cent compared to last year. The strongest sales growth this month occurred in the North East and East districts, which are the most affordable districts in the city.
New listings improved relative to last year’s levels, but with 1,350 new listings in October and 1,333 sales, the sales-to-new-listings ratio for detached homes rose to 99 per cent, inventories fell to 2,063 units and the moths of supply dipped below two months. Further tightening in the detached market resulted in upward pressure on home prices. In October, the detached price reached $540,900, up nearly one per cent compared with last month and over 10 per cent higher than levels reported last October. On a year-to-date basis, price growth has been the strongest in the North and South East districts, where prices have increased by over 11 per cent. 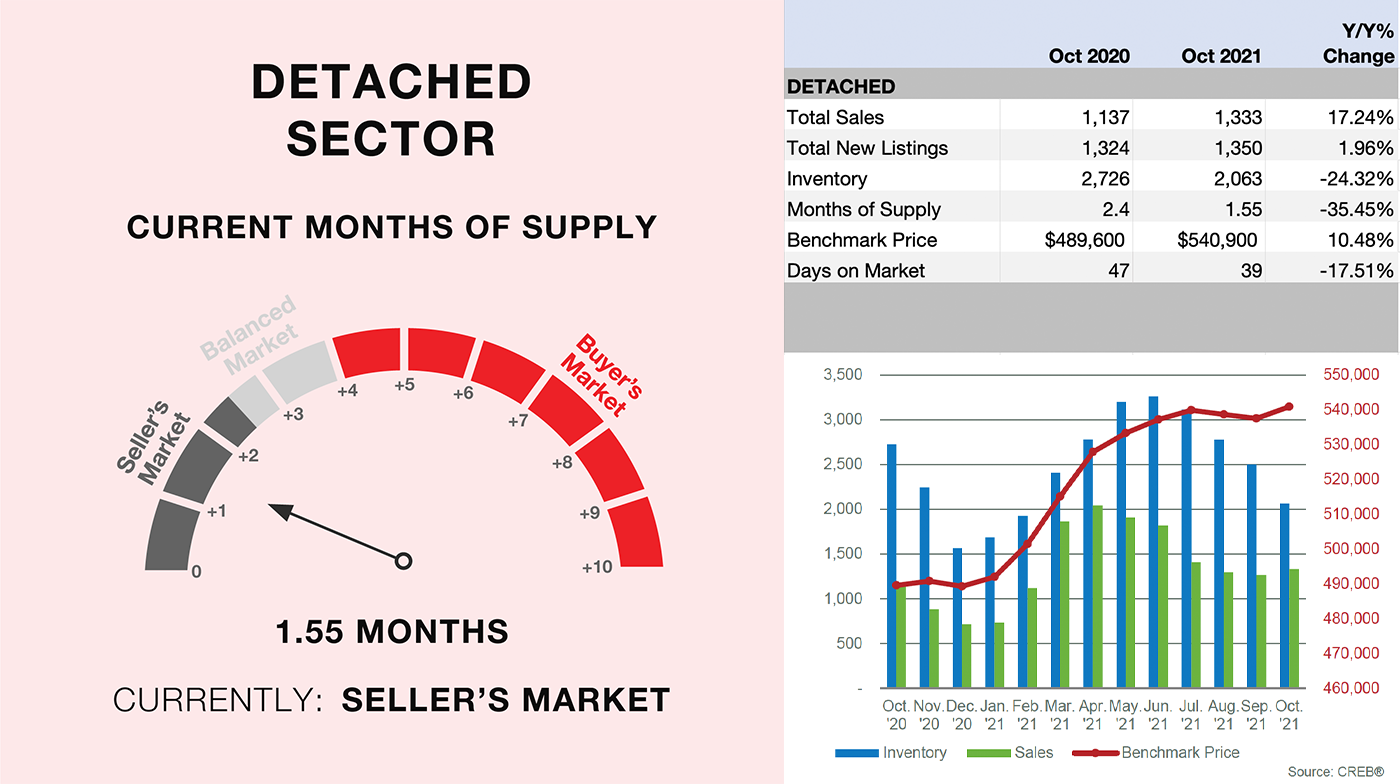 Sales continued to improve this month, contributing to the year-to-date record high. However, new listings eased and the sales-to-new-listings ratio rose to 98 per cent as inventories fell. The months of supply, which has trended down over the past several months, once again placed upward pressure on prices in the sector.
The semi-detached benchmark price rose to $427,800 this month, nearly nine per cent higher than last year’s levels. So far this year, sales have improved across every district, but the tightest conditions have been in the South East and North districts. These two districts have also seen the highest year-to-date price gains, which have exceeded 10 per cent. 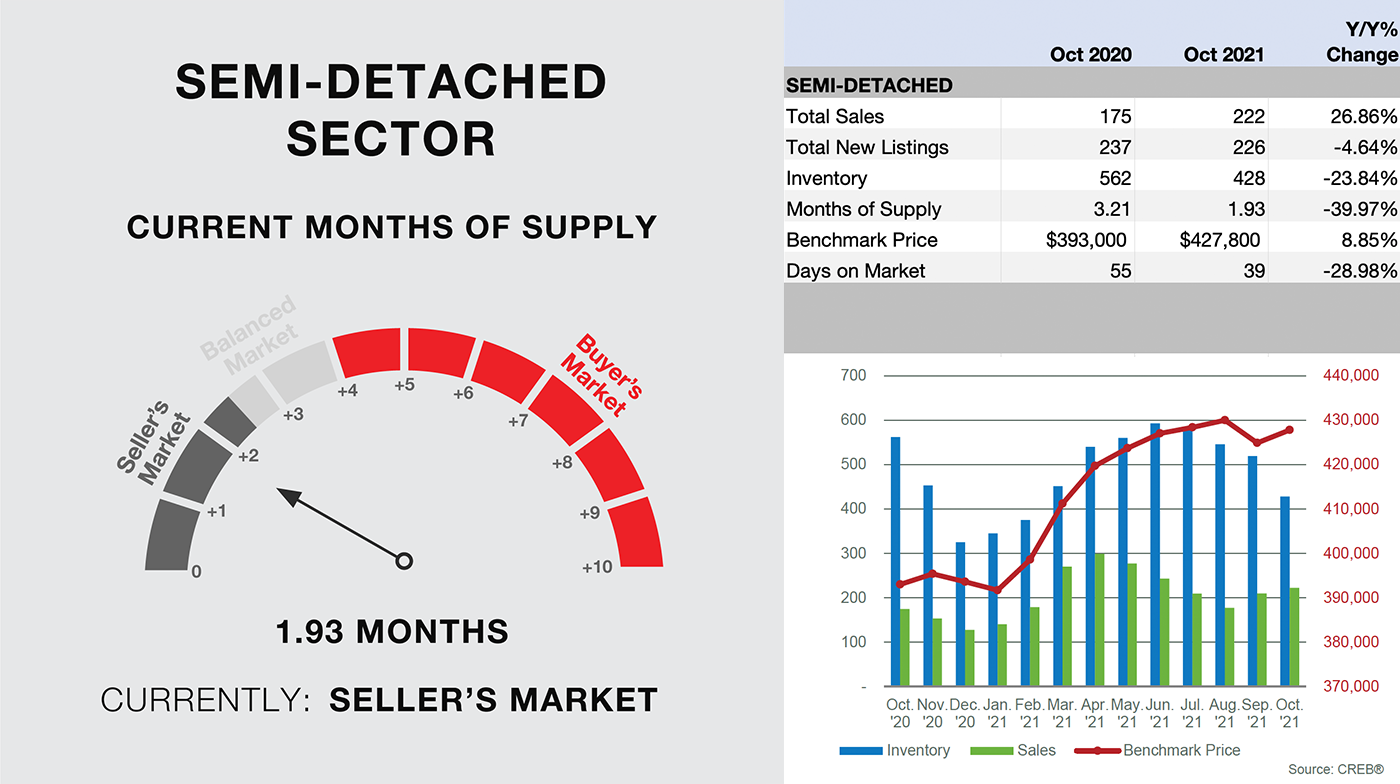 Thanks to improvements across most districts, row sales remained relatively strong in October, contributing to the year-to-date record high. However, unlike other sectors, the row sector did see a significant increase in new listings compared with last year’s levels, preventing a large decline in inventory. This helped push the months of supply back above three months. The market is not as tight as it was last month, but conditions are still far tighter than levels typically seen during this time of year and vary significantly by district. The months of supply remained below three months in the North, South, South East and East districts in October.
Row prices have not recovered from previous highs, but prices did trend up this month. So far this year, the largest gains have been for row homes in both the East and North East districts, where benchmark prices have averaged less than $200,000 in 2021. 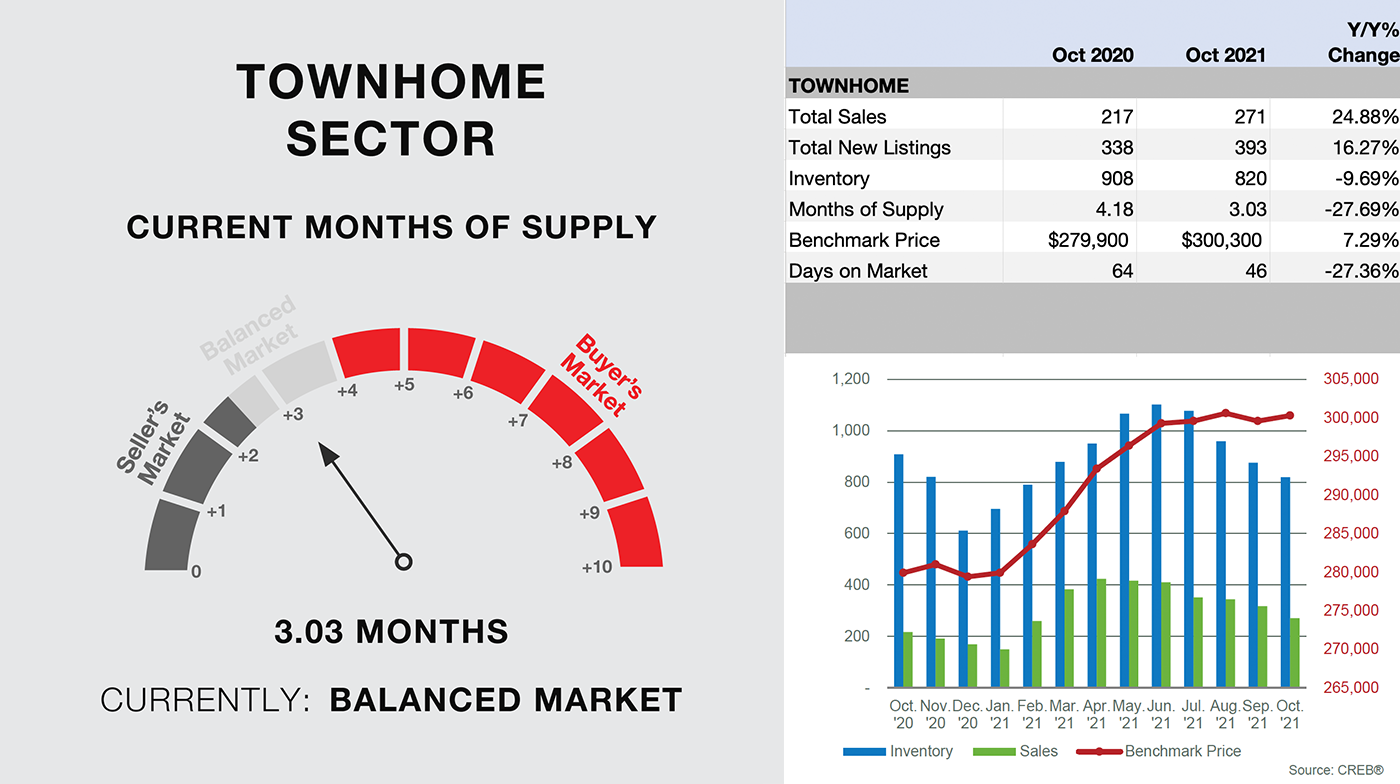 Apartment
Thanks to improvements across the city, October condominium sales were strong relative to both last year’s levels and long-term averages. Nearly half of the condo sales occurred in the City Centre, which was the only district to see monthly sales trend up significantly relative to last month. Some of the sales gains could be related to price adjustments in the district, as October benchmark prices were over three per cent lower than last year’s levels and trended down from last month. The decline in the City Centre prices offset the gains recorded in other parts of the city, causing citywide figures to remain relatively unchanged from levels recorded last October.
Despite some of the monthly shifts on a year-to-date basis, condominium prices have improved by over two per cent compared with last year, with gains ranging from less than one per cent in the City Centre to over six per cent in the West district. Price gains for apartments are far lower than other property types, as the same supply challenges have not existed in this sector. 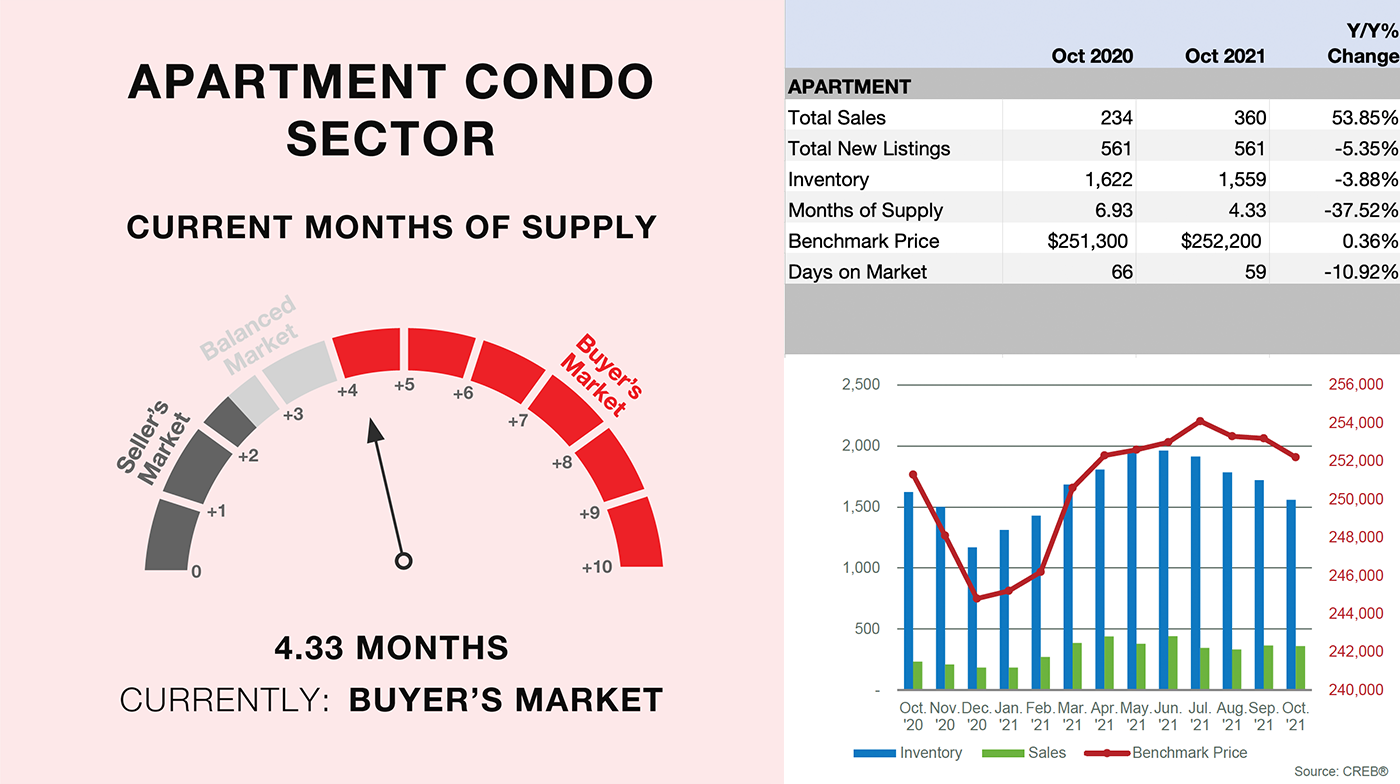