Sales Remain Strong in September – Residential sales totalled 2,162 in September, nearing the record high for the month recorded in 2005. Further gains in new listings likely supported some of the sales growth that occurred this month. “While sales activity in the fall tends to be slower than in the spring months, the continued strong sales are likely being driven by consumers who were unable to transact earlier in the year when supply levels had not yet adjusted to demand,” said CREB® chief economist Ann-Marie Lurie. “The market continues to favour the seller, but conditions are not as tight as they were earlier this year.”
Inventory levels in September eased to 5,607 units, keeping the months of supply below three months. However, there is significant variation depending on property type and the tightest conditions continue to be in the detached market, with under two months of supply. At the same time, the apartment condominium sector is not facing the same level of supply challenges, with nearly five months of inventory available based on current demand levels.
Supply adjustments have helped ease the upward pressure on home prices. Prices have eased slightly relative to a few months ago, but they remain well above levels recorded earlier in the year. As of September, the total residential benchmark price in Calgary was $457,900, over eight per cent higher than levels recorded last year.

Detached - Calgary recorded 1,268 sales this month, a significant gain relative to last year and 30 per cent higher than longer-term trends. Sales this month improved across all price ranges except homes priced under $400,000. However, the decline in sales in the lower price range is likely related to limited supply choice.
On a year-to-date basis, prices have improved across all districts, with gains that range from a low of five per cent in the City Centre to nearly twelve per cent in the South East. The City Centre is the only district where prices remain below previous highs. The September detached benchmark price of $537,500 has trended down slightly from the record high set in July, but this has not erased earlier gains, as it remains nearly 10 per cent higher than last year. 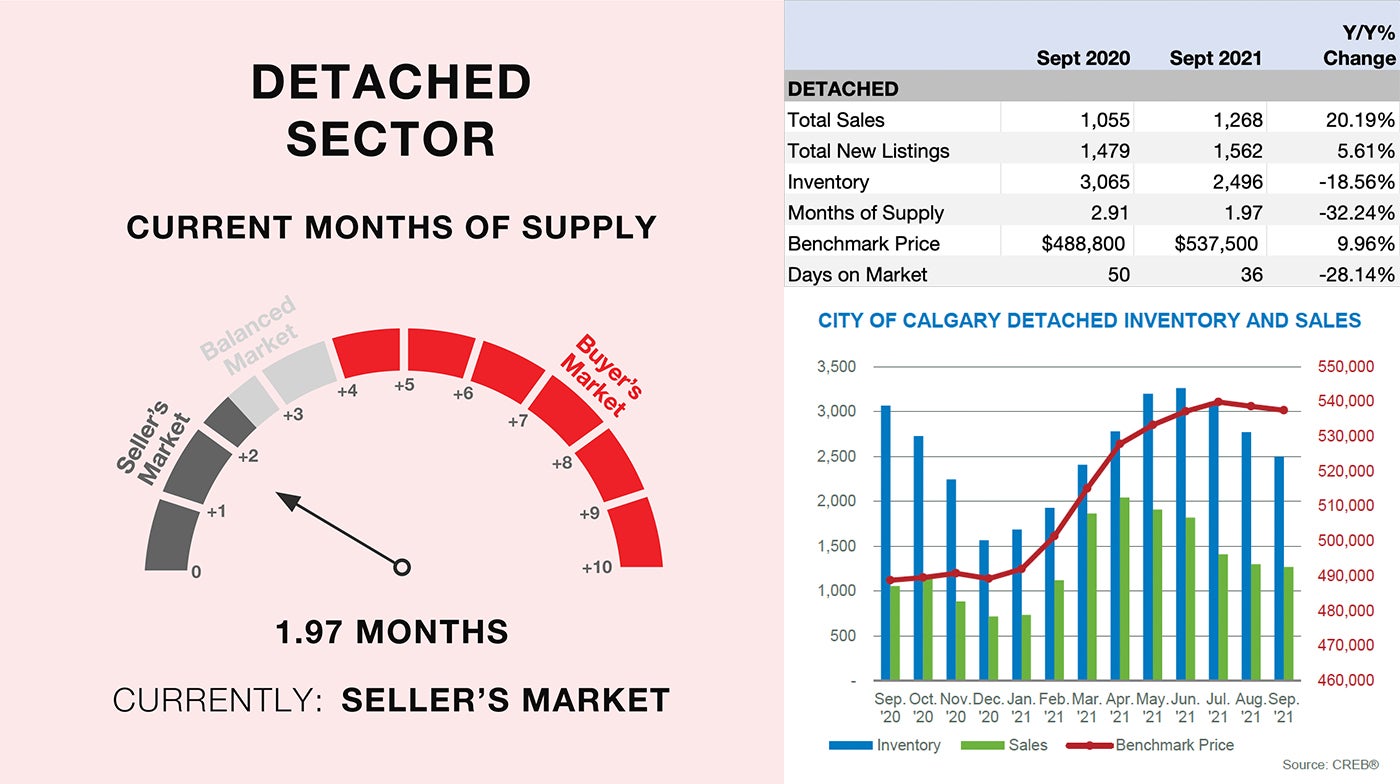 Semi-Detached - With less supply choice in the lower price ranges of the detached market, many consumers have turned to the semi-detached sector. With 2,005 sales so far this year, year-to-date sales are over 45 per cent higher than long-term trends and have reached new record highs. The improvement in sales was, in part, related to the improvements in new listings. The sales-to-new-listings ratio in this sector has averaged below 70 per cent over the past several months. This is nowhere near as tight as the detached sector, which has averaged 80 per cent.
While conditions have not been as tight in the semi-detached sector, there have still been substantial price gains this year. As of September, the benchmark price was $424,900, slightly lower than last month, but over eight per cent higher than last year’s levels. Like the detached sector, the semi-detached sector’s slowest price growth has occurred in the City Centre. On a year-to-date basis, prices remained below previous highs in the City Centre, North East and South districts. 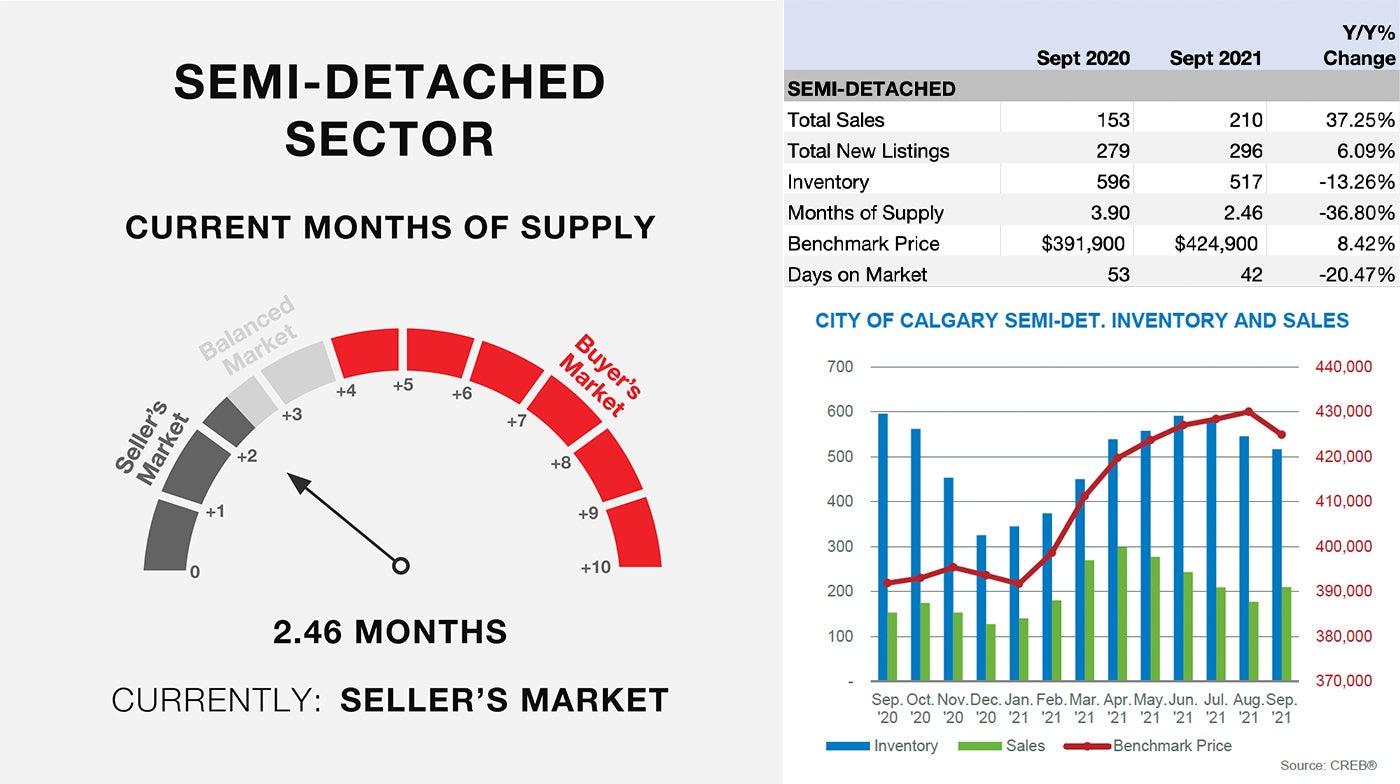 Row - With 318 sales this month, year-to-date sales pushed up to 3,057 units, which is 62 per cent above long-term trends and on pace to hit record levels this year. Sales have risen across every district, with the largest growth recorded in the South East district.
While new listings did improve this month, it was not enough to prevent further declines in Inventory levels. The months of supply remained relatively low at less than three months, which is well below traditional levels for this time of year. Tighter conditions have supported price growth across all districts so far in 2021. However, unlike the detached and semi-detached sectors, row prices remain below previous highs across all districts in the city. 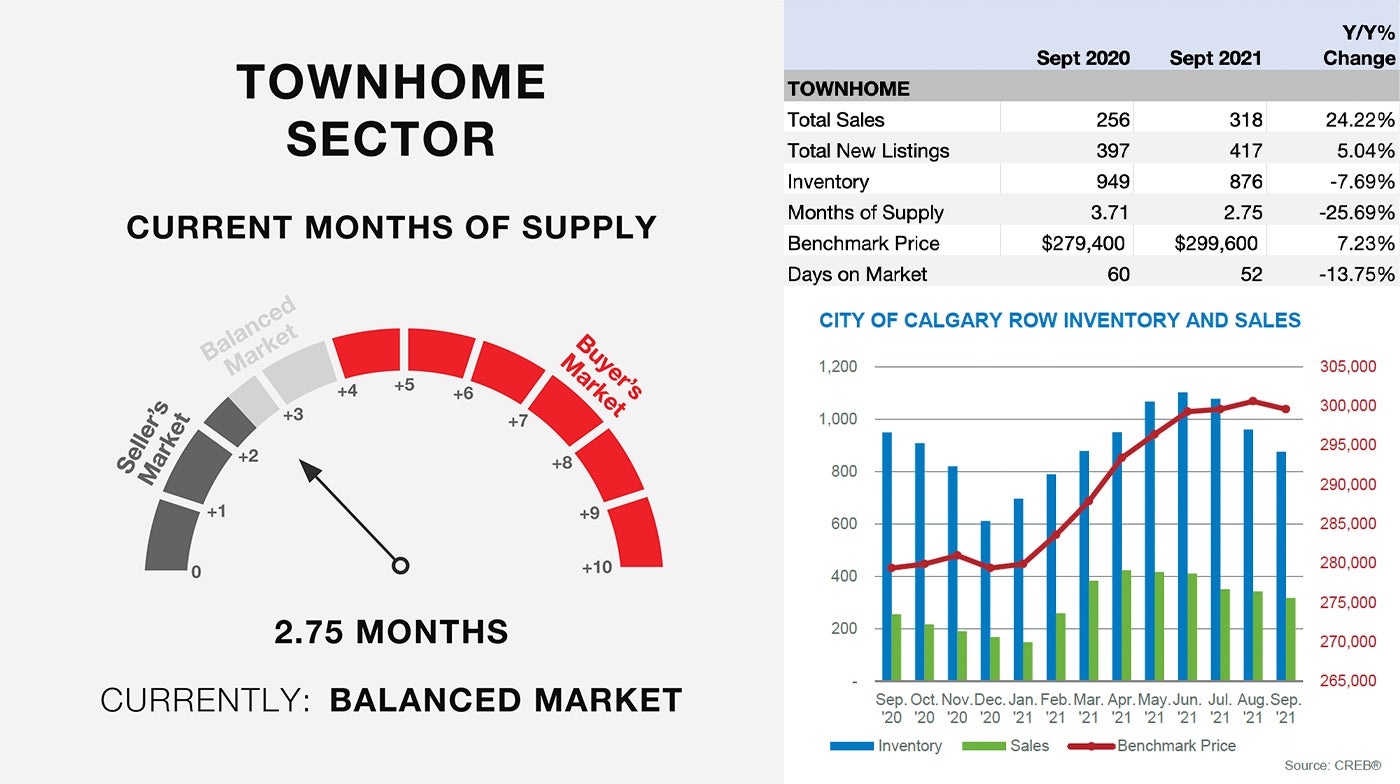 Apartment Condominium - A boost in new listings this month translated into some gains in sales activity. However, with a sales-to-new-listings ratio of 58 per cent, inventories still trended up relative to the previous month and last year’s levels.
The months of supply remained just below five months in September, far lower than levels recorded last year and over the past five years. Conditions have generally been more balanced for this property type compared with other sectors, preventing strong price gains. On a year-to-date basis, citywide benchmark prices improved by nearly three per cent, but they remain over 14 per cent lower than previous highs. 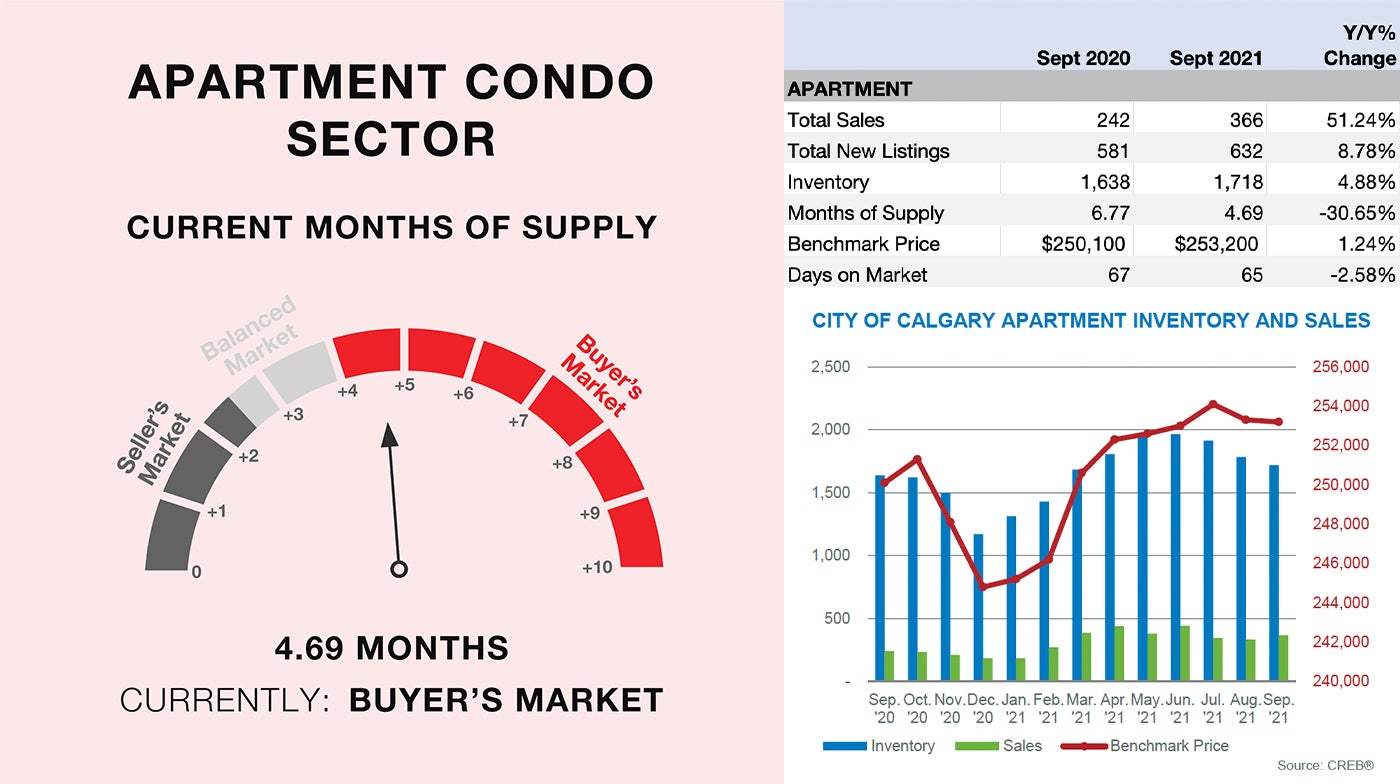