Demand For Homes Remains High With Record Sales In April! - There were 3,209 sales in April, a new record high for the month, as Calgary's housing market continues to bounce back from the pandemic lows recorded in 2020. "Despite entering the third wave of COVID-19, there is more optimism of economic recovery when the economy re-opens," said CREB® chief economist Ann-Marie Lurie. "However, the recent surge in home sales could be a result of potential buyers wanting to enter the market before any further changes occur in prices, interest rates and lending policy. This could erode some of their purchasing power." Recent price gains and tight market conditions have also encouraged many sellers to list their home this month. However, demand was strong enough to absorb the additional supply, ensuring the market continues to favour the seller.

With 4,670 new listings coming onto the market in April, inventory levels trended up relative to last month and last year. With the elevated sales, the months of supply remains below two months.

While sales improved across most price ranges, product priced above $600,000 represented 25 per cent of the sales that occurred this month. This is a significant increase from last year when they only represented 12 per cent of sales. The shift in distribution is causing both the average and median prices to record double-digit year-over-year price gains.

DETACHED - Detached homes hit a new record high for the month with 2,046 sales in April.

Gains in new listings helped support stronger sales, but they did little to ease the persistent sellers' market conditions. The months of supply remained well below two months in this segment, which is contributing to a steady climb in prices.

Strong price gains occurred across most districts in the city thanks to persistently tight conditions. However, the pace of price adjustments did vary depending on location. The City Centre district has seen the slowest rebound and prices remain nearly seven per cent below previous highs. 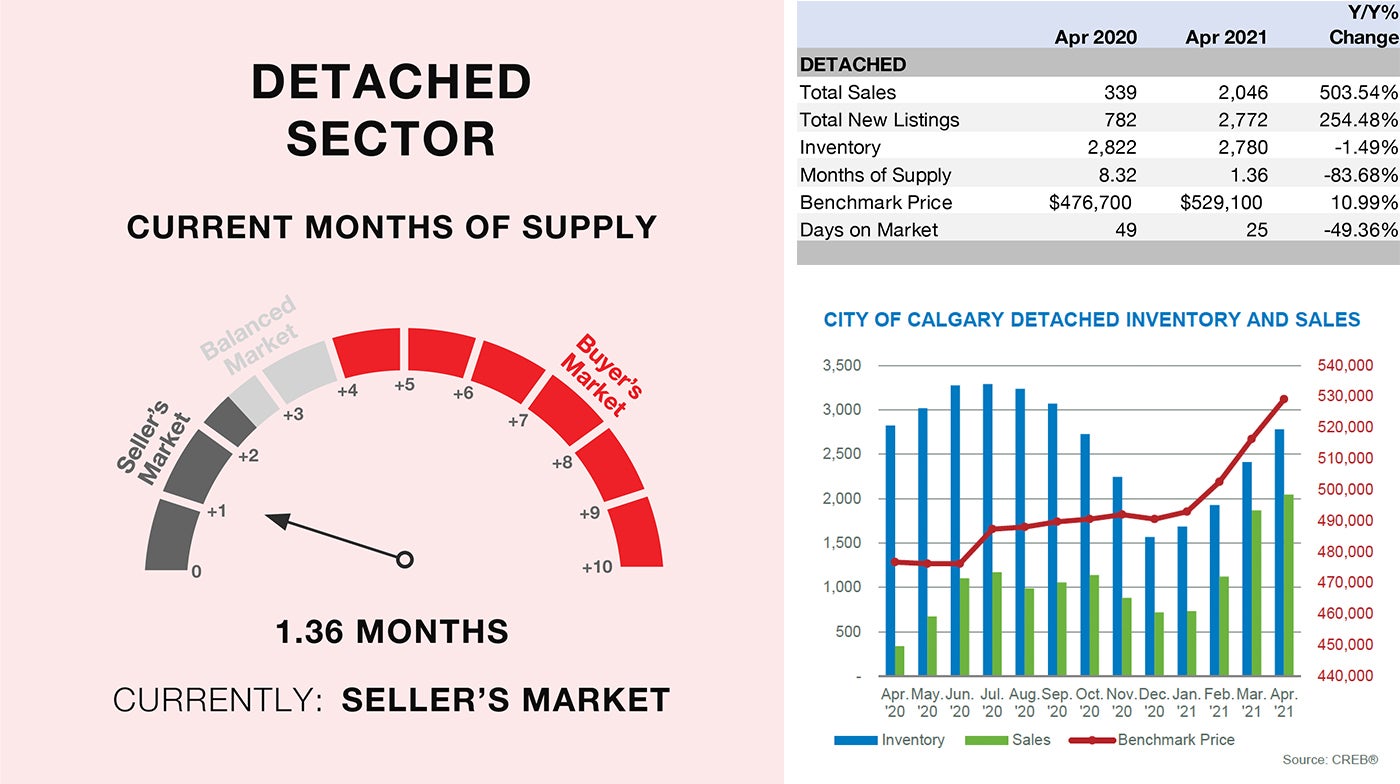 This is the only property type to reach record highs based on year-to-date figures. Gains occurred across every district and price range. Like the other sectors, gains in new listings were not enough to move the market out of sellers' conditions, as the months of supply remained below two months.

The tight market conditions supported price growth across all districts, with the strongest year-over-year gains occurring in the North, North West, and South East districts. In April, year-over-year price gains in these districts were above 12 per cent, which was enough to support new monthly record-high prices. 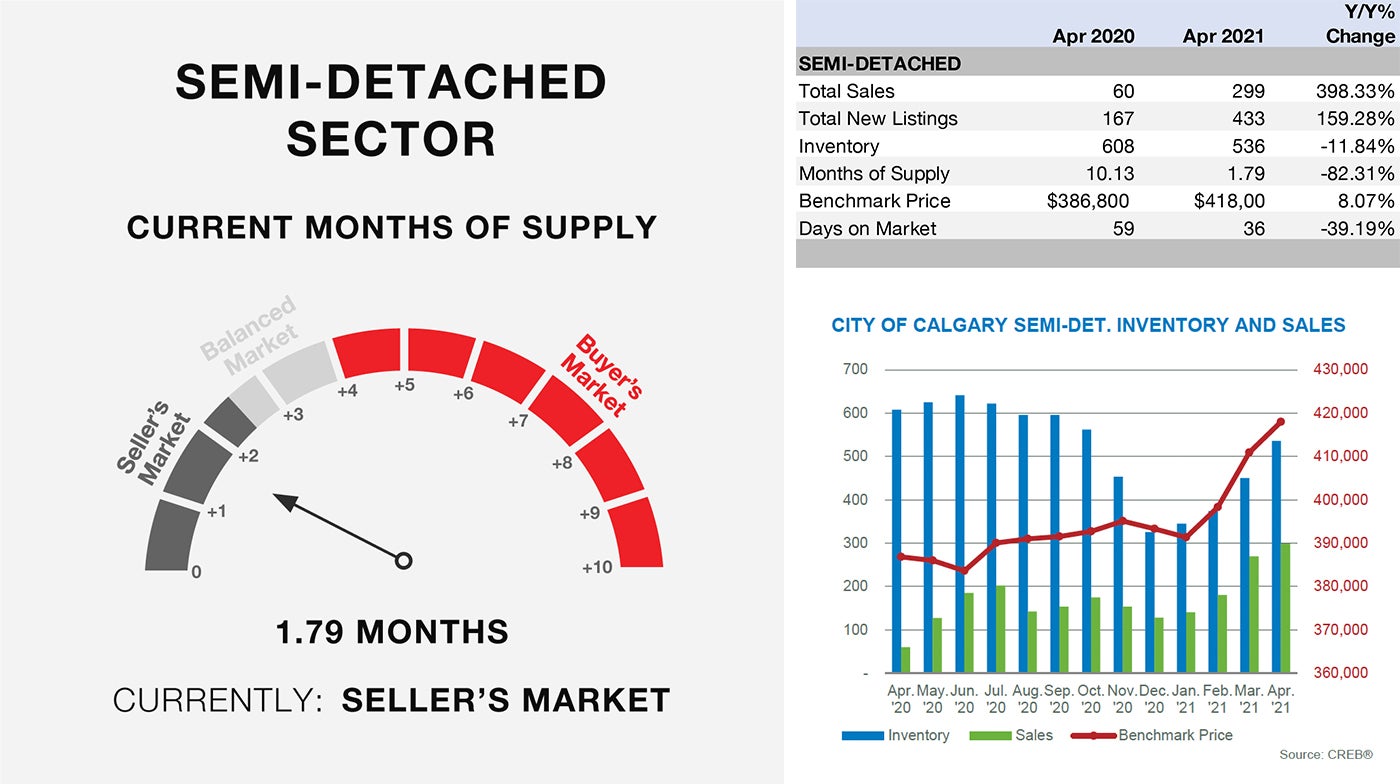 ROW - After the first four months of the year, row sales totalled 1,217 units. This the best start to the year since 2007, and well above long-term averages.

New listings in this sector have also been on the rise, causing inventories to trend up. Supply has risen above levels recorded last April, but strong sales compared to inventory levels have caused the months of supply to remain just above two months. This is significantly lower than the longer-term average, which is closer to four months.

While these conditions have only persisted over the past three months, prices have been slower to climb. As of April, row benchmark prices climbed to $293,400. Prices have been trending up across all districts of the city, but they remain well below previous highs. 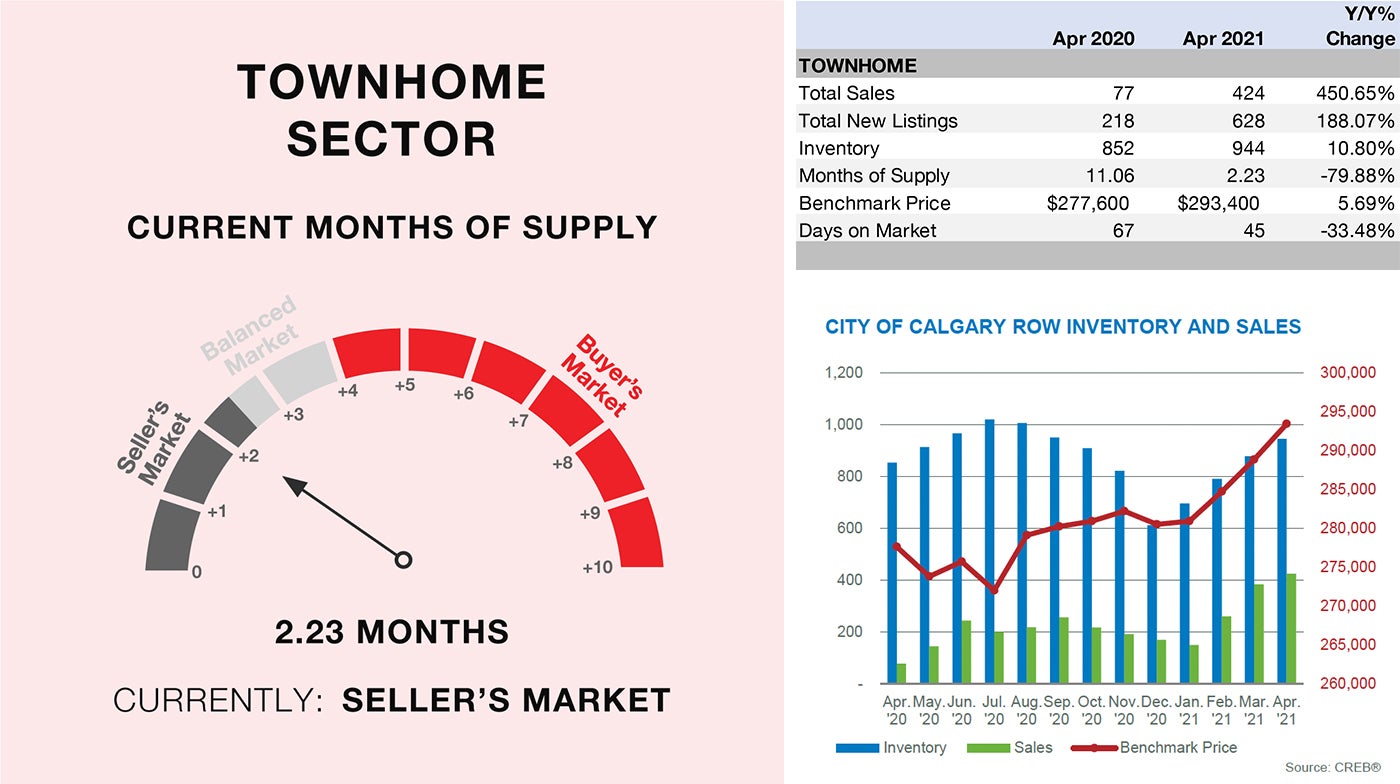 APARTMENT CONDOMINIUM - Further improvements in April resulted in 1,280 year-to-date sales in this sector, which is the strongest sales seen over the past six years.

New listings also remained high compared to typical levels and inventories continued to rise. There was more inventory in the market, but the improvement in sales did cause further reductions in the months of supply.

In April, the months of supply was just over four months. This is fairly consistent with longer-term trends and reflects the most balanced conditions seen for some time. With less oversupply in the market, prices have been trending up and in April the benchmark price was $251,900. This is more than three per cent higher than last year.

Price improvements did vary by location and it will take some time for prices to recover to previous highs.

For example, there was a two per cent year-over-year increase in the City Centre, where most of the condo sales occur, but prices remain nearly 17 per cent lower than previous highs. 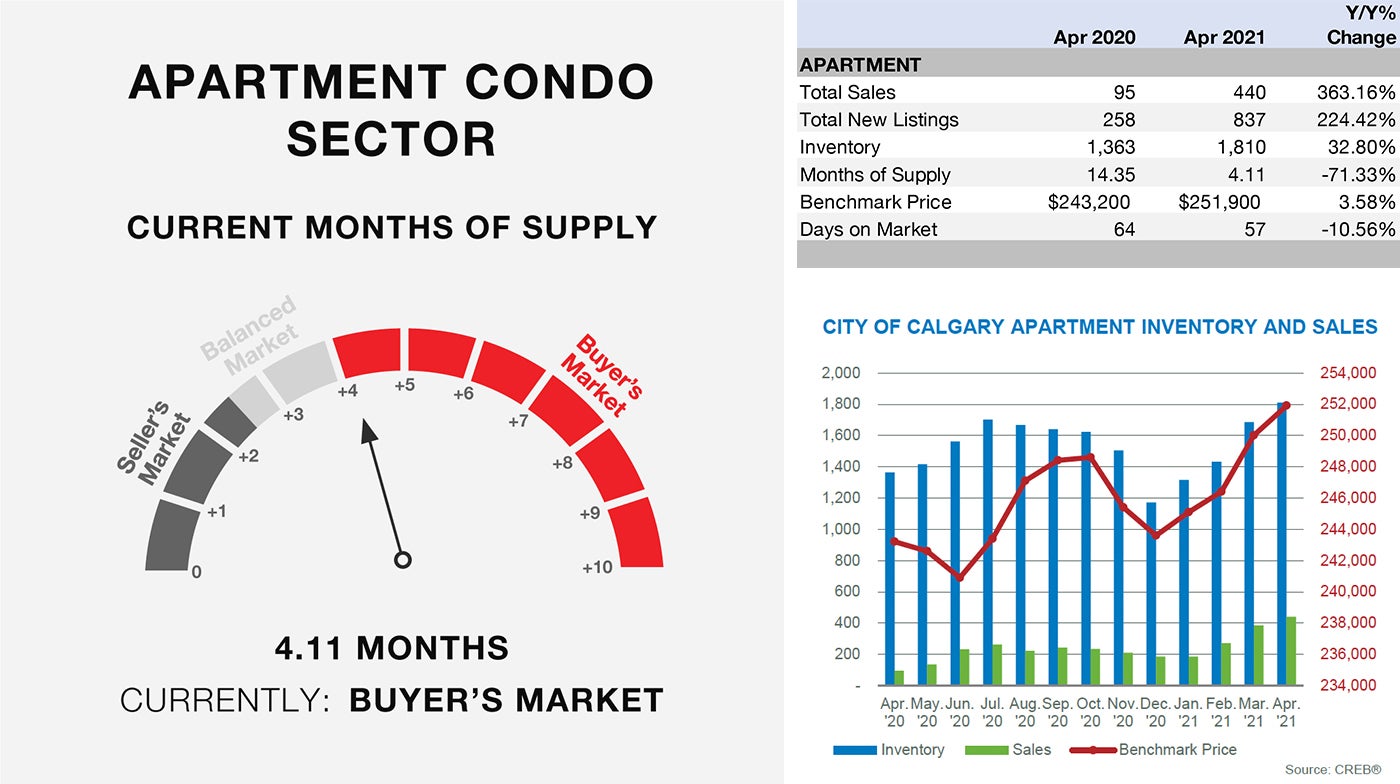