Inventory Rises, But Sellers' Market Conditions Persist - With 2,989 sales, housing market activity hit a new May record. Despite strong levels of sales, they did trend down relative to last month. Additionally, there were 4,562 new listings, causing seasonally adjusted inventory levels to increase over last month. "The recent gains in prices have encouraged more homeowners to list their homes and take advantage of the current market situation," said CREB® chief economist Ann-Marie Lurie. "However, the inventory gains are still not enough to offset the demand growth and the market continues to favour the seller. Prices are rising, but they are still recovering in our market from previous highs in 2014. Only detached and semi-detached home prices in certain districts and communities have recovered to the level of previous monthly highs." The months of supply did trend up slightly this month to just over two months, but it was not enough to halt the upward pressure on prices. The unadjusted benchmark price in May reached $455,200. This is one per cent higher than last month and nearly 11 per cent higher than prices recorded last year. Sales have been rising across all product types, but homes priced above $600,000 represent a larger-than-usual share of all sales. The upper end of the market only reflected 16 per cent of city sales last May, compared with this year where it now reflects nearly 26 per cent of all sales.

Due to relatively strong new listings, inventories are trending up relative to both the previous month and the previous year. This caused the months of supply to increase to 1.7 months and reflects some easing of the extremely tight market conditions seen over the past several months. However, the detached market continues to favour the seller and prices continue to rise.

Detached home prices rose across each district, with the largest year-over-year gains occurring in the North, North West and South East districts.

The gains in prices have been supporting price recovery for detached homes. As of May, only the City Centre and North East districts have seen prices remain below previous highs. 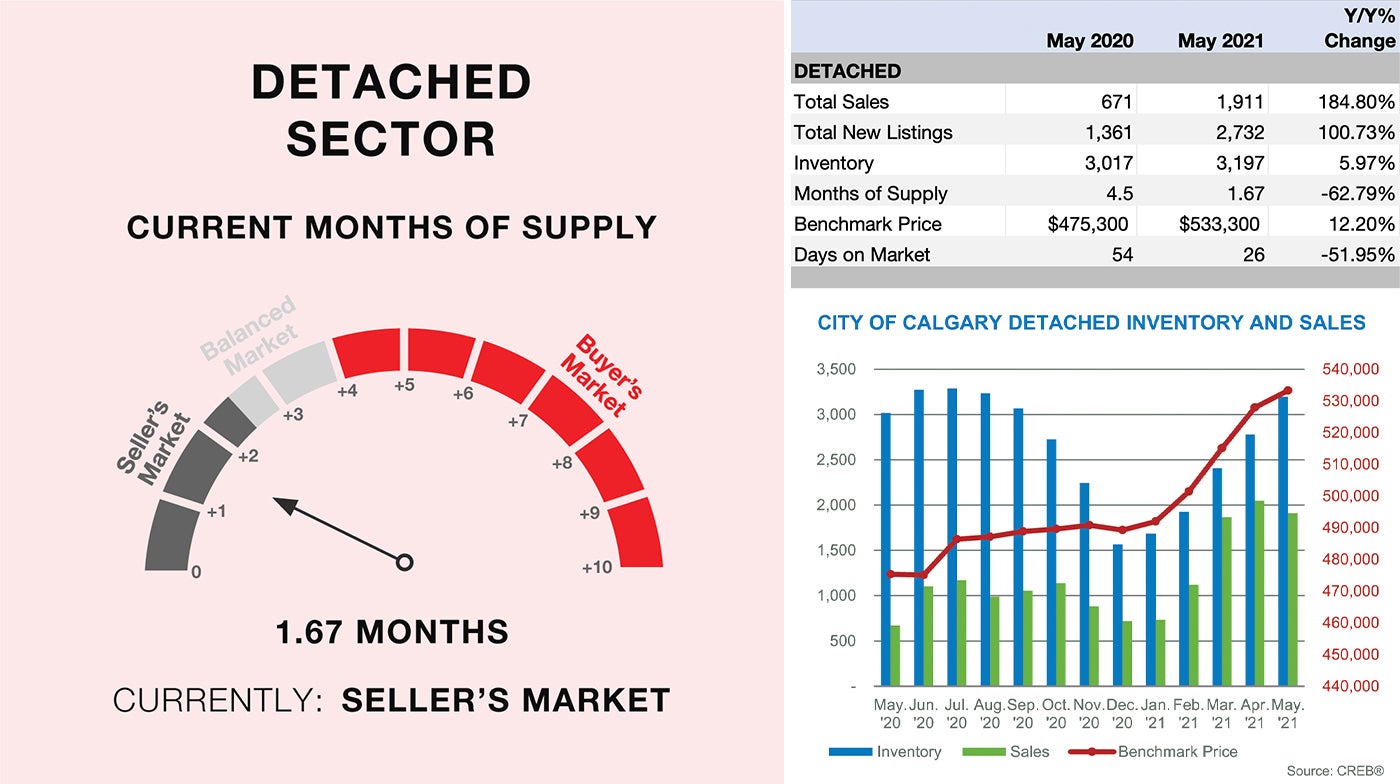 Semi-Detached - Year-to-date sales totalled 1,169 units, which is the strongest five-month total on record for this product type. Despite some adjustments in new listings, the sales-to-new-listings ratio rose to nearly 75 per cent.

Overall, the months of supply remained below two months for semi-detached housing, supporting further price gains on a monthly and year-over-year basis.

Benchmark prices have seen double-digit price gains compared to last year's levels in all districts except the City Centre.

The highest gains have occurred in the South East, South and North districts. While the city total is showing a recovery in price based on monthly levels, there are several districts where prices continue to remain below their previous highs. 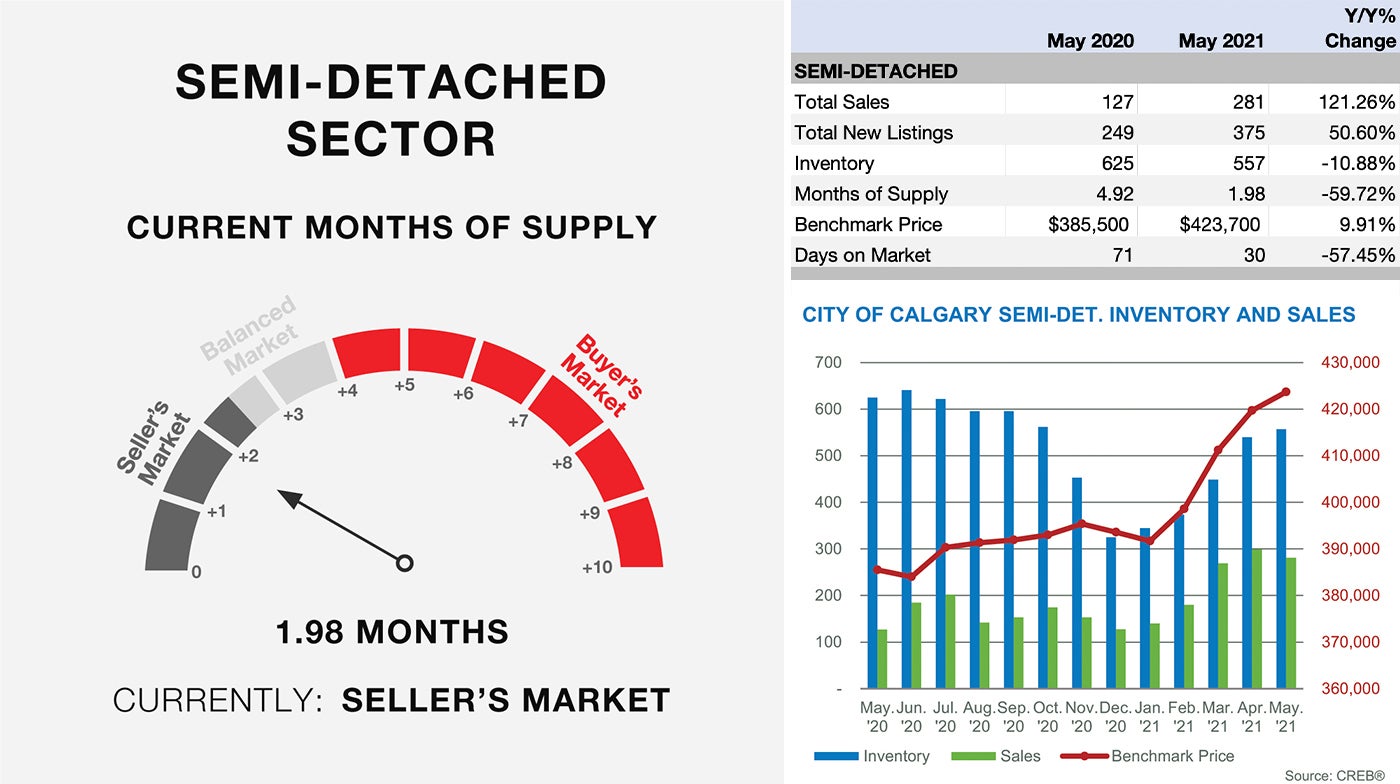 Row - Inventory levels trended up compared to last month and levels seen last year. This is due to further gains in new listings relative to sales and caused the months of supply to rise to 2.5 months.

However, conditions continue to favour the seller, which is causing further price gains this month. The unadjusted benchmark citywide price totalled $296,400. This is a one per cent increase over last month and nearly eight per cent higher than last year. 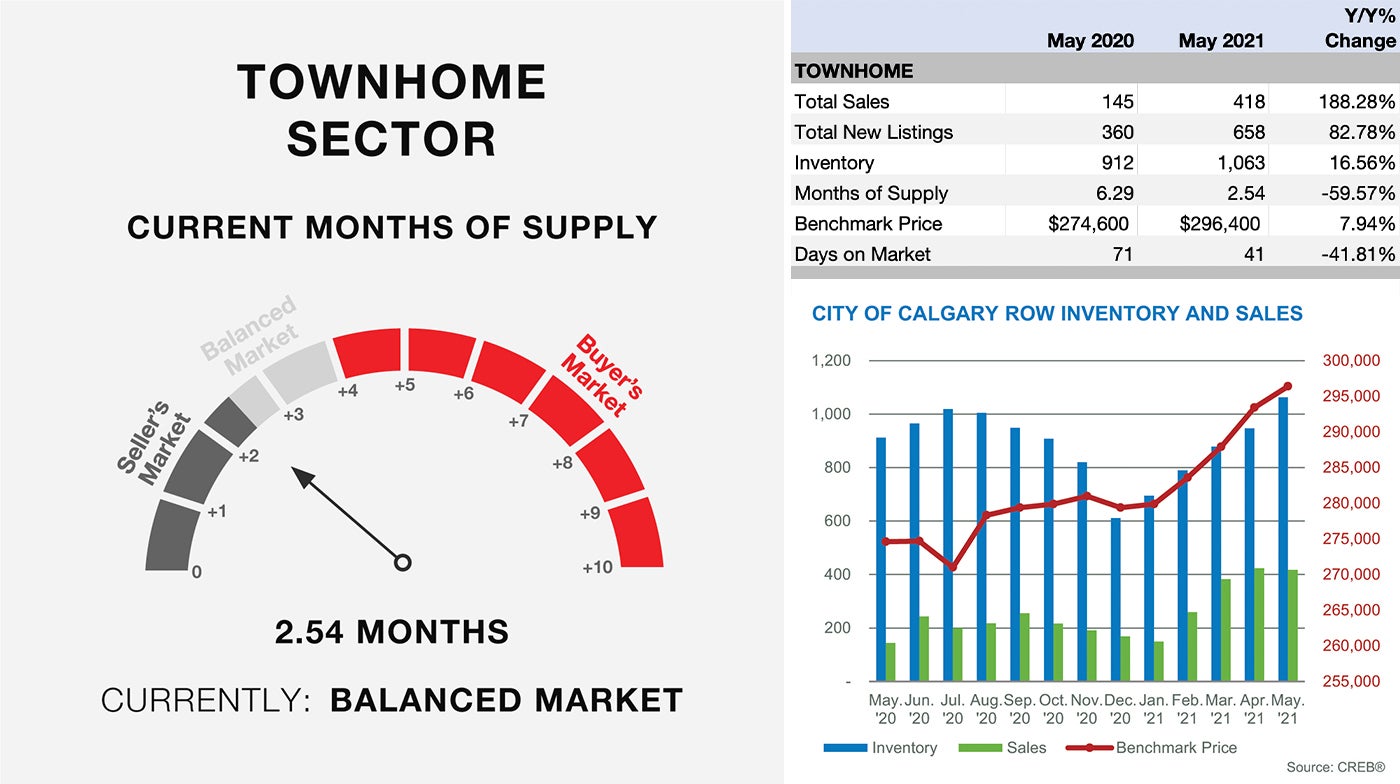 This is highest number of sales seen since 2014. Despite the improvements, seasonally adjusted sales did trend down relative to last month.

Recent price increases are likely supporting some of the strength in new listings. While levels have been trending down compared to a few months ago, they do remain elevated based on what we typically see in May. As the sales-to-new-listings ratio eased to 48 per cent, we saw inventories trend up this month, pushing the months of supply to over five months.

Slightly higher supply levels compared to sales did impact the pace of monthly gains in the benchmark price. However, May prices remain nearly five per cent higher than last year's levels. Price movements also varied depending on location, but no district has seen prices recover to previous highs.

Currently, the citywide price remains nearly 16 per cent below 2014 levels.